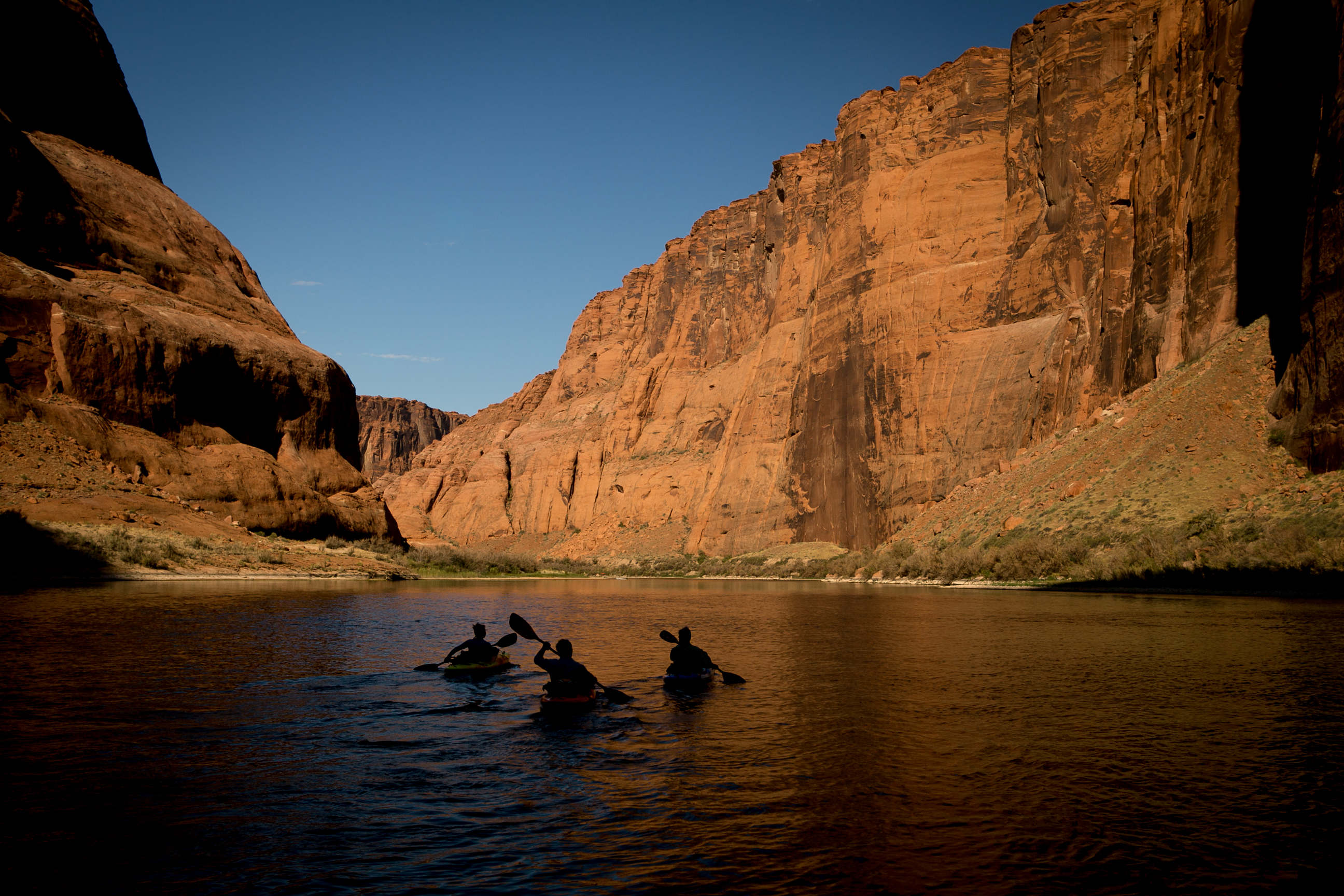 Do you know those stories where a kid finds a hidden treasure map in an attic or a lost letter in an old book? Growing up, I always dreamed someday I’d find a mysterious clue that set me on an adventure.

In the remote southwest corner of Wyoming, I came across a curious historic marker. On the sign was a faded photograph: two handsome men and a fetching blonde. They didn’t look like the rugged mountain men or explorers of the American West that I’d seen before on historic signs. Instead, they seemed like they could have been my friends. The sign hinted at an incredible voyage.

In the summer of 1938, newlyweds Genevieve and Bernard de Colmont and their friend, Antoine de Seynes, set off from France on the biggest adventure of their lives. They had a bold, perhaps even foolhardy plan: be the first to take kayaks down the mighty Green and Colorado rivers. They launched from Green River, Wyoming, and emerged 900 miles and two months later in Lee’s Ferry, Arizona, with their travels vividly documented on 16 millimeter color film—a year before Hollywood’s first color movie.

And Genevieve, just age 21, would become the first woman to paddle her own boat on these rivers. A vanguard of recreational adventurers, the French Trio’s journey offers a unique and previously unseen window into a transitional moment in America: the last chapter of the Wild West, and the first chapter of the Modern era.

What led an explorer, his new bride, and his best friend halfway around the world, on the eve of World War II? What ever happened to them? And what did these “Voyagers Without Trace” leave to be found? To go further on this search meant one unavoidable thing: I had to go down the river. There was just one problem: I didn’t know how to kayak! But that hadn’t stopped the French Trio; they weren’t professional kayakers, but just beginners. So I assembled my own trio, with acclaimed adventure athlete Paul Kuthe and his fiancée, Kate.

We set off down the dangerous whitewater to search for any remaining traces of this journey. What I found was more than I could have expected: the original color film documenting their 1938 trip, unseen photos, a diary… and even one of the original kayaks, held in a 16th century fortress in the peaks of the Pyrenees, with an unexpected connection to the French Resistance.

From my discoveries emerged a story more remarkable than I could have imagined, revealing the possibilities that free-spirited risk-taking offers to all.