As a way of bringing you the best of Flagstaff Mountain Film Festival submissions throughout its history and present day, we have teamed up with the Orpheum Theater to bring you an exciting Summer and Fall Showcase Series. These Series will feature the best of our cultural, environmental, and adventure-related films and have special guests to share their stories.

In partnership with The Honors College, NAU, and The Orpheum Theater, we bring an array of films that capture how cultures will continue to thrive in the face of climate change, and also modernity. These are films that celebrate the indomitable spirit, reveal human ingenuity and resourcefulness in the face of adversity, and generate the most illuminating discussions on the fate of humankind.

Our feature film is ‘Adaptation: Bangladesh’ by Justin Deshields. Alizé Carrère, Cultural Ecologist, National Geographic Explorer, and subject of the film will be here to present this work, the first in a series of remarkable real-life examples of how people are adapting and innovating in the face of environmental change.

A number of initiatives, environmental groups, and nonprofits will be present in order to engage with the public on issues of local, national, and global importance.

In celebration of Colorado River Days, the Flagstaff Mountain Film Festival is opening the archives to present of best of Canyon and River Films, including among others Martin’s Boat, which is the ultimate tribute to the grandfather of the Colorado River, Martin Litton. We’ll also be doing it Martin’s way with our resident storytellers Brad Dimock and Dave Edwards (aka Boyo) spinning yarns that capture nearly a century of experience on “The American Nile.” 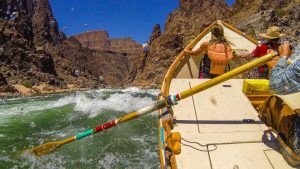 Amy Martin our featured artist will present her work “Tierra Prometida, Promised Land”; exploring the deep connection the Latino community in the Yuma Valley has with the Colorado River.
Attendees at Ed Kabotie’s Colorado River Day’s event at the Museum of Northern Arizona will receive a $3 discount on entry at the Orpheum.

Given the current state of our world, there has never been a more important time to let our voices rise to protect and preserve the land held sacred by others. Let’s join in this fight and celebrate indigenous cultures.

We are proud to present “AWAKE: A Dream from Standing Rock” by Academy Award nominees Josh Fox, James Spione, and Indigenous filmmaker Myron Dewey. The film tells the story of the #NODAPL Native-led resistance against the construction of the $3.7 billion Dakota Access Pipeline under the Missouri River at the Standing Rock Sioux Reservation in North Dakota.

The feature is supported by “Monster Slayer,” a contemporary retelling of the Navajo hero twins story. Featuring local artist and activist Shonto Begay, the film has traveled throughout America and will return to the big screen in Flagstaff once again.

Local and national non-profits will be present at the event to educate about their current work.

Mid-summer dreams of sand and waves take form and install new awareness with our tribute to the world’s oceans featuring “Chasing Coral” which just took home the Audience Award at the 2017 Telluride Mountainfilm.

Coral reefs around the world are vanishing at an unprecedented rate. Chasing Coral documents divers, photographers, and scientists as they set out on an ocean adventure to discover why the reefs are disappearing.

Featuring: Save the Snake, Into The Ditch, and Chasing Coral

June 29 – A Celebration of Summer

We’ll be opening the FMFF archives to assemble a collection of films that inspire us to get outside and play hard in the long days and summer sun.